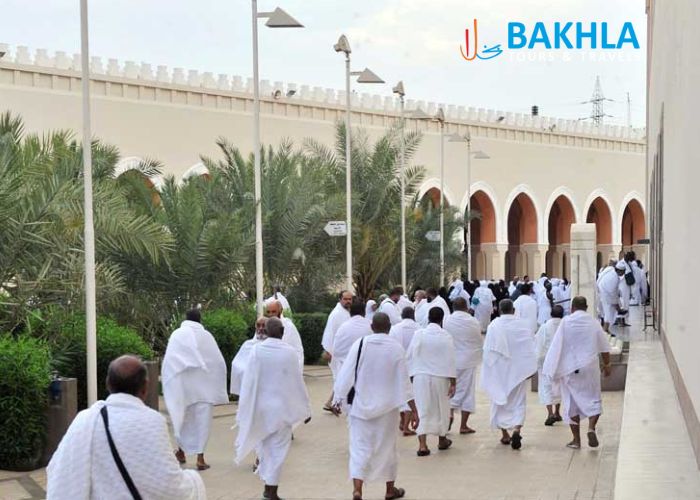 When Muslims perform Hajj, they are reminded of Allah’s powerful legacy which refreshes a Muslims commitment towards Islam and helps them attain pure faith in Allah the Exalted. When on Hajj the differences between riches, community and caste don’t matter. No matter which race, caste, colour, country or how rich we are, we are all one and the same in the eyes of Allah Subhanahu. ( This value is not only observed during Hajj but is also one of the followings of Islam. For example when Muslims stand for namaz, we all stand together, diminishing any differences between each other) And to make this feeling mutual among all who come for Hajj Ihram is worn to depict it.Ihram relates to the state of purity and equality before Allah which Muslims enter before going on Hajj. A pilgrim must enter into this state before crossing the pilgrimage boundary, known as Meeqaat, by performing the cleansing rituals and wearing the prescribed attire.

After the Niyyat is done, it is also recommended to pray two Rakat Salah to finally step into the pure state of Ihram. In the Holy Quran, Almighty Allah says: “O you who believe! Fulfill (your) obligations. Lawful to you (for food) are all the beasts of cattle except that which will be announced to you (herein), game (also) being unlawful when you assume Ihram for Hajj or ‘Umrah (pilgrimage). Verily, Allah commands that which He wills” (Quran, 5: 1). It is obligatory for every pilgrim to wear Ihram before passing the Meeqaat. Our beloved Prophet Mohammed (Sallallahu Alaihi Wasallam) stated in one of His hadith: “One shouldn’t pass the Meeqaat unless he/she is in the state of Ihram.” (Al-Bukhari)

It is incumbent on all persons living beyond the Meeqaat to put on the Ihram if they intend to enter Makkah for Hajj. It is advisable that after taking a bath at home, men should put on their Ihram and women should wear their normal dresses with their heads fully covered. Salaat-e-Ihram, Niyyat and reciting of Talbiya may be postponed until one gets his boarding card, and gets cleared through Immigration and Customs. It frequently happens that the flight is cancelled or delayed for long hours. In such cases if one has made Niyyat of Ihram from the house one may face great inconvenience. Further in that case it will not be possible for one to wear garlands of flowers or embrace their near and dear ones during farewell since they may have applied perfume which may cost them a Dam. At airports, necessary facilities are provided for entering the Ihram. One can take advantage of them!

Procedure of entering the Ihram:

It is a Sunnah to use Miswak and have a bath before putting on the Ihraam. If this is not possible, Wudhoo will suffice. As narrated by Hazrat Zayed Bin Thaabit that the Holy Prophet Muhammad Sallallahu Alaihi Wasallam had taken a bath before donning the Ihram.(Abu Dawood) same applies for children and women not in the state of offering Salaat.

It is Mustahab and to cut nails and remove personal hair and that of armpits before the bath. This is applicable to both men and women.

The Ihram for men consists of two pieces of cloth. Preferably white and new. One for the lower portion of the body covering from Waste up to above the ankle and the other for the upper portion of the body. The head and the face should be left uncovered. No other garment should be worn. The footwear should be such that the centre bones of the upper part of the feet (area of the shoe Laces) must be left uncovered.

Women will put on their normal clothes however the head should be fully covered. Their faces and hands up to the wrist may be exposed. However, it becomes Wajib to cover their faces if they fear a Fitna. This should be done in such a manner that the covering does not touch the face. (Tip: Women can wear a tennis sports cap before putting on her niqab to avoid it from touching their face)

After putting on the Ihram and reaching the airport and completing all the formalities as explained earlier, if it is not a makrooh time then offer two rakat Salaat-e-Ihram. During the salat, men will cover their heads with the Iram sheets. It is Mustahab to recite Surah Kafiroon in the first rakat and Surah Ikhlas in the second rakat. After Salah men should uncover their heads.

Note: A woman not in the state of offering salah will not offer it, she will perform ghusl, and put on her clothes which will serve as her Ihram. The ones who are on their menstrual cycles may perform the pilgrimage once their cycle is over.

Ihram of a Minor:

The above information of Ihram is regarding men and women but what about a Minor? If you intend to take your minor child with you then?

If the child is not matured enough to put on Ihram and perform its rituals himself / herself, then his/her Walee (Guardian) has to dress the child accordingly. Walee has to make the Niyat on behalf of such a child and see to it that the child observes all the prohibitions in Ihram. Walee will perform all the rituals of Hajj and Umrah on his/her behalf. However, he is not required to offer prayers which are Wajib after Tawaf on behalf of the child.

If an immature child dons his own a Ihram and completes the ritual himself then his Hajj is invalid. In this case it is Wajib on the Walee to perform the rituals on behalf of such child, except prayers which are Wajib after Tawaf.

If the child is mature enough to put on a Ihram and perform its rituals himself / herself, then he / she will put on the dress accordingly. Make the Niyat and observe all the prohibitions of the Iram. Such a child will perform all the rituals of Hajj and Umrah himself/herself.

If the child fails to observe any prohibitions of the Ihram aur commits any mistake on expiation entails. Even if a child’s Hajj becomes Faasid, it is not to be repeated.

However, this will be a Nafl Hajj. After the child attains puberty and if the Hajj becomes Fardh on this child, he / she has to perform it on his / her own.